Introduction
Rowing boats and technique varies widely between Coastal rowing, Gig rowing and Inland Rowing. Most rowing undertaken by members of Wimbleball RC is of the latter type – Inland rowing. This is usually undertaken on lakes such as at our home base at Wimbleball, or on rivers and estuaries.

The boats we use at Wimbleball are predominantly ‘Fine Boats’ , also know as Olympic Class boats. In addition for beginners we also have training boats available, such as the ‘Virus boat’ or else fine boats fitted with small floats for extra stability.

The fine boat, also known as the Olympic class boat, is the familiar racing shell that you will see rowed or sculled at inland competitions.

In ‘sweep’ boats, each rower has one oar (or blade). In ‘sculling’ boats (such as in the image above), the oarsmen use two blades. The fine boats generally have one, two, four or eight seats. The eights will always have a coxswain (cox) to steer and direct the crew, whereas a four may be coxed or coxless depending on the type of boat used. 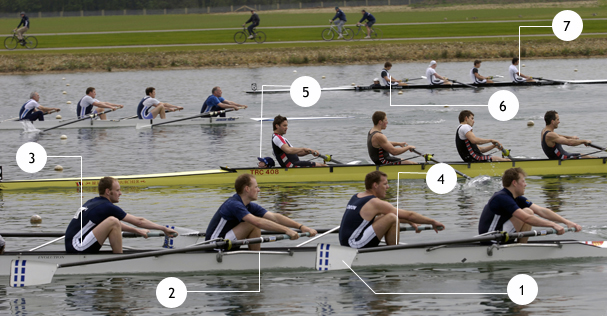 When you learn to row, you begin with simple exercises. The following sequence of photos shows you what you will be working towards. 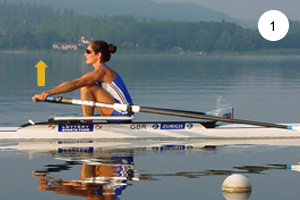 This is the start of the drive phase of the stroke, when the blades are placed in the water (called ‘the catch’) and the boat is driven forwards using the large muscle groups in the legs and body.

The seat begins to move backwards faster than shoulders. This fault is known as ‘bum shoving’ and it causes the powerful leg drive to be weakened considerably. 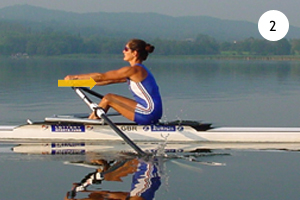 It is a mistake to think that rowing is pulling with the arms, but many beginners do this.

Arms pulling over the knees into an arc causing the blades to plunge too deep. 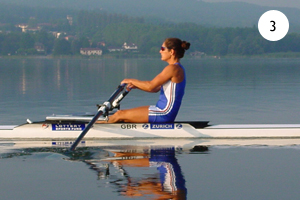 Nearing the end of the drive phase the body swings back and the arms are used to maintain the momentum of the blade handles.

The blade handle is pulled down (instead of along) causing the blade to lift from the water before the end of the stroke. This is called ‘washing out’. 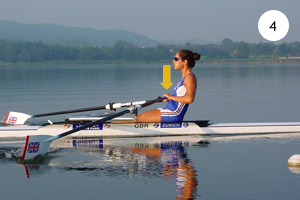 The hands make a small tap downwards, to lift the blades clear of the water.

This is the end of the drive phase and the recovery phase begins. 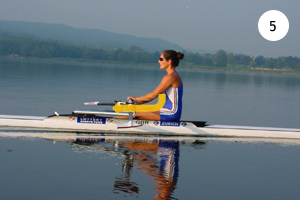 At the beginning of the recovery phase, the hands move down and away, following the trajectory of the arrow.

The knees lift and get in the way of the hands, which should be moving parallel to the boat. 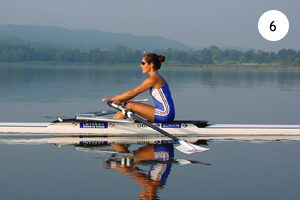 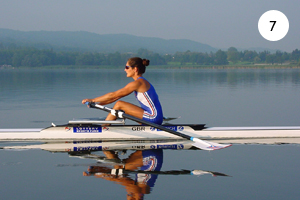 The body is upright and the arms are not held out long enough. 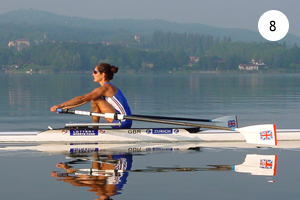 The body at this point is in the catch position, moving forward until the shins are vertical and the sequence begins again.